It's that Time Again 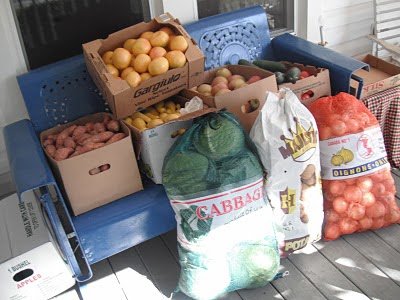 Remember back in the beginning of November when we went to the Farmer's Market? Well, it's that time again! We hope to go very soon. I learned a few things about how best to store the vegetables since that trip. I learned that the potatoes weren't cured as well as they should have been and that two months is about it in storing those. Besides the ones we stored in the kitchen initially, we stored the rest flat on the attic floor, on top of brown paper sacks. That worked very well.

The onions were stored two ways. One way was storing them in a box, cushioned in between wadded up newspaper so they didn't touch. Some were in the attic and some were under our bed. The other way we stored some was by tying the onions up into pantyhose and knotting them in between each onion to keep them from touching and also being able to hang them. This was the best way of storing the onions. We hung them in our attic this way. I'd say that they could be stored in this manner up to three months.

I sliced, blanched and froze a lot of the squash to use in casseroles, or stew. That was the only thing I believe I preserved.

The cabbage didn't store so well. I stored the extra ones under our bed. I think I'll try in the attic next time for those. The attic is cooler than under our bed. I had to throw three heads of cabbage out to the chickens due to them going bad sooner than I'd like. :(

The sweet potatoes are doing very well being stored in the attic as well. Those are so easy to keep! We have just a few more meals left for those as well. We wrapped those in strips of newspaper and stored them in a box.

I believe our attic stays in the 50s as far as temperature in the winter. This temperature is pretty good for a lot of vegetable storage.

We ate the rest fairly quickly except for the grapefruit, so storage wasn't a problem. We shouldn't have gotten so much grapefruit as I thought we were going to turn into one by eating it so much!

I am thinking when we go to the market this time, since it's January that there won't be so much out there. Who knows, though. We might find some goodies we didn't expect!
Posted by Susan at 5:26 PM

We store our potatoes in the root cellar. They do pretty good out there. By April or May we generally start buying them until we can dig some up. We generally plant our root vegetables by St. Patrick's Day.

I guess if we lived in warmer climates the attic might come in handy that way.

Have a great evening with your family.

What did you get at the produce stand this visit? Would love to see your "haul".

Hi Susan! I found this post so interesting. I never even thought about storing things in our attic! My attic is huge and has a high ceiling, I could so use that space.
I'd love to hear how this last shopping trip went.
Ginny