Time to Catch Up 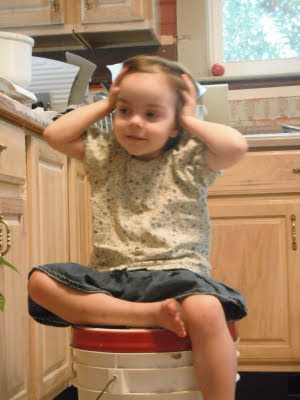 Hello Everybody! I trust that you are all doing well. We are doing fairly fine. We have been quite busy since our last visit. I suppose that is a redundant statement!
School is going well. I think that we are finding a good pattern to our days. Although, since it's still warm outside the children do often ask to get into the pool in the midst of the day. Mostly I tell them they have to wait until all chores and school is complete. Then on some days I say, "why not??? Go ahead!" Sadly, summer doesn't last forever and so we'd better relish it while we can!

Our new chickens are doing pretty well. We did have one that was ill yesterday and so we had to put her out of her misery. That was sad! So we are down to 24 new birds (8 are meat birds, as we lost two). Hopefully the rest will flourish and all will be well. It's been a week since they've arrived.

On Tuesday we planted some carrot and spinach seed. It will be interesting to see what comes of it. These were from seed packs we bought reduced at some local dollar stores so it doesn't come out well, there's no great loss! We have pea plants that should be producing in about three weeks. It's been a very good pea year!

I have started back on weight loss. I had gained back 5 pounds in the past few months so I hope to lose that and another ten on top of that. I never can seem to get passed a certain number. It would be nice to though! Maybe since I've been resting from a diet for a while, I won't hit a plateau until I am passed that number. We'll see! The first things I have implemented in my plan are:


I have also started paying attention to my hunger signals and semi-counting my calorie consumption. For the longest time I did this by habit so I was surprised to realize that I had stopped...thus the 5 pound gain!

I've realized that the very number I am at now is the number that makes me start having bad feelings about myself. So, I'll be glad to be below that. It doesn't do anyone good to feel bad about yourself!
Posted by Susan at 12:47 PM