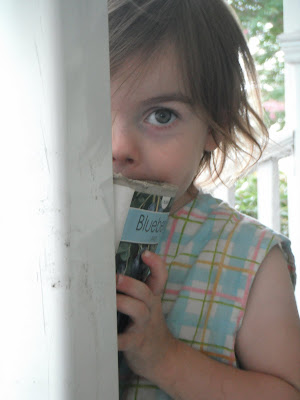 Today was a very good day. I got hubby sent off to work as usual. I did not have any bread made so I sent him with boiled eggs for lunch. Bad me. He ate at Subway anyway as boiled eggs just won't do. :D
For breakfast we had cinnamon raisin english muffins with peanut butter. I was able to get supper going in the crockpots this morning. One crockpot was loaded with pinto beans and the other with cubed steak, gravy, onion and potatoes. I had a few of the children to do a little picking up upstairs in the playroom. I guess you could tell it if you knew what it looked like before. :/ I think I'm going to have to do most of it on my own. Children just don't know how to organize sometimes.

I did get around to baking bread today-- being that I was heavily reminded this morning. Ha! Jesse helped with this a bit. He really got flour happy in doing so. As I baked the bread, I made our lunch of lasagna Hamburger Helper and corn. I thought of the chemical red dyes in the Hamburger Helper the entire time we ate. It was tasty and easy though.

I was very ready for a nap by 2:00- so took one. I woke up the flour being spread from the kitchen all the way to the front door- compliments of the 4 and 7 year olds... and also the olders who were to be watching them but didn't notice their mischief. :/ So we had a happy session of vacuuming, sweeping and mopping....a lot of mopping.

I only got three loads of laundry done today- minus one not being folded. The good news is that the two oldest folded the mountain of clothes that was backed up. Yay, them!

This evening hubby tilled under the empty spots in the garden again and we planted A LOT of lima beans, green beans and colossus peas. I have a feeling we'll be busy in about two months or so. :D I hope so anyway.

I'd better get off here and switch the laundry once more. Also I need to make sure supper leftovers are put away. It is now quiet... all children except the oldest are in bed. I might go listen to the crickets chirp a bit. Have a blessed evening!
Posted by Susan at 10:24 PM

I think you deserved a nap!! Your days are so busy!!

Can I ask...How much canning do you do for a family your size??

I know you garden earnestly and was wondering how much of each do you plant and preserve or do you eat it all fresh??

For us this years garden is better than last years garden which is a good thing but I still don't think it will be a pantry busting kind of harvest. We are looking to plant a few more rows I guess almost a fall garden?? But this is something I've never done before so I am kinda lost on the how tos of it all.

I'm feeling the pinch more and more and to be honest I am trying to get as much put up as possible.

Hopefully whatever I can't get to grow I will be able to buy and put up but at reasonable prices.
Thanks for any advice Susan!!
Dana

I so need to make bread, but just can't fit it in to my days right now. I like it fresh, so I only make two loaves at a time.

That is a very cute picture at the top of the post. Isn't it great when the older kids help out. I know I appreciate all that my girls do.

Have a great day with your family.